Went to Sure Heboh carnival for the first time. Not what I expected. Not many personalities around, at least not that I know of. The crowd was huge. Mostly Malays, and Indonesians. Since they did the carnival at a parking lot, there was virtually no place to park! Roads were closed, and I believed Makro suffered a 2 day loss when roads leading to it were closed. Parked cars were seen from the Tesco area to the Batu 3 road (leading to Bukit Jelutong). 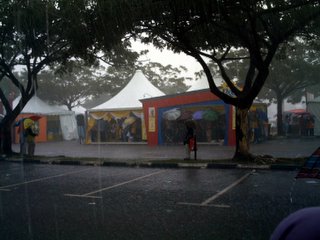 Imagine that!The 1st time I went to Sure Heboh and it was raining cats, dogs and their owners! 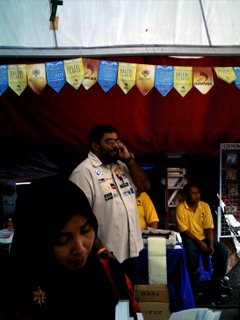 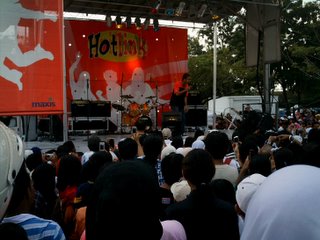 I was expecting a bigger crowd watching Mawi. Maybe it’s the rain. Maybe they’re waiting for the night’s concert. 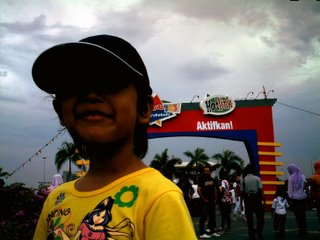 My niece at the main entrance. I forgot to reset my camera’s exposure setting, thus resulting in dark photos. Had to Photoshop them 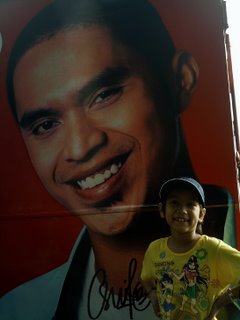 Although I did get my niece to see Mawi, but she didn’t get to be on TV, nor take a photo with him. But on our long walk from Makro to Giant (My sister’s picking us up there, since the roads are all closed) we came to a Mamme noodle’s truck, with Mawi, Amylea and Felix’s picture on the sides. So this is literally my niece and Mawi’s photo (emphasis on the grammar). 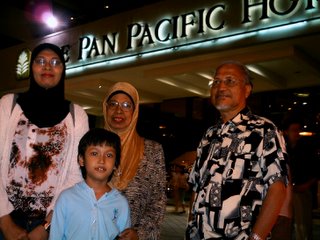 In front of Pan Pacific KL, where my sister bought them a buffet dinner for their 41st anniversary. Happy anniversary,mak & bapak. Sorry I didn’t get to attend your wedding.

So what if TV3 profitted from the program. It’s killing 2 birds with one stone. TV3 did gain some profit, and those appeared on TV did receive the much needed help. Many people in their vicinity didn’t know they exist. Now that they know, they could help. What’s your contributuion to these poor people Mr Paliamentarian, sir?

What boggles my mind was, why does these poor people have so many children when they have so little to eat?

The answer I came up after some asking around was so obvious, it was also a joke.

They have no lights, and it gets cold in the night. So they go to bed early (You’d need some kinky thoughts to understand the sentence).

But this joke is also the truth. There’s also the ‘more children, more blessing’ ideology but truth be said, the parents are being unfair to their children. I have no problem if you want to have a gazillion children, provided if you can afford it. Don’t you pity your eldest son/daughter skipping school to help you feed the other 8?

I’m thinking of writing an article in the paper (if they choose to show it) to propose to the government to give out free condoms to these poor people. Teach them family planning. To me, this beats giving away free syringes to drug addicts.

What do you think? Is this a good idea? Shall I send the article?

2 responses to “Sure Heboh + Free Condoms”