We woke up to a heavy downpour. If it’s any other day, it would be blissful to sleep in. However, we’re supposed to hitch a ride with Zoefri to the ferry terminal, and he leaves at about 7am, so we braved the coldness to bathe in the rainy morning. 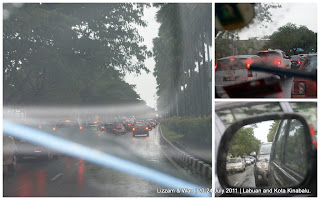 Since we already bought the ferry ticket, we didn’t need to rush as much. Ferries from Labuan goes to KK every morning at 8.30am, and later in the evening at around 3pm. But if you opt for the Labuan – Menumbok route, you can choose from the speedboat, the passenger ferry or the vehicle ferry. From Menumbok, one can choose from leased cars to busses. The ferry ride takes from 15 to 30 minutes and the bus ride, another 2 hours. It’s also cheaper to go via this route. The ferry costs from RM 15 to RM 25, depending on the type of ferry, and the bus is RM 14 (express route to KK, without going to Beaufort first)

The ferry ride was as good as any, but with a little more roll then the ride to Labuan. But this time, we got a better seat, in front, away from the constant rumbling and vibrating of the engine at the back, and closer to the speaker so I can at least hear better the KL Gangster movie they were playing. 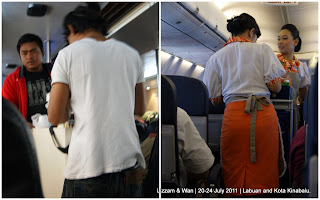 Hotels are abundant in KK area, mostly right in the heart of the city. Budget hotels range from around RM70 to a little more than RM 100, while the better hotels, with better amenities and sea view, range from RM 150 onwards.

I was opting for Lavender’s Lodge (had a good impression of it last time, and it has good reviews in Tripadvisor) but it was full. So was Rafflesia Hotel. Both offer RM 70 rooms for couples, with basic amenities and WiFi. Another choice of mine was Ruby Hotel because it was offering a room with a bath tub and breakfast for RM 89 during promotion. Usual rates for those rooms were RM 109, but they do have normal rooms for RM 79.

Tune Hotels also serve a good value, if you don’t mind it being quite far from the city (the bus ride used to cost RM 1, not sure about now), or having a transport (a Proton Wira can cost from RM 90 onwards). Oh, the bus ends operation quite early (around 7pm). So you might miss the KK nightlife if you don’t have a transport.

Wifey suggested Wah May, since it’s where she and her family stayed during her convocation, but if my memories serve me right, the rooms seems ancient.

At last, after walking up and down the streets for quite some time, we ended up with Kinabalu Hotel (not to be confused with Kinabalu Daya Hotel), costing RM 70 per night for a queen sized bedroom without windows (add RM 10 for windows, but it’s just a view of the street below or the night market – not worth it). You’ll need a deposit of RM 50 which will be refunded upon checkout. Check-in is at 2pm and checkout is at 12 pm. 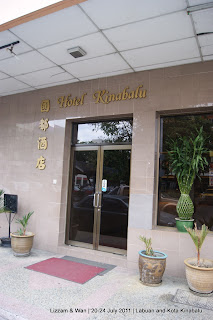 Not the best of choices but we missed some of the newer hotels and avoided some of the older ones.
First thing we did after checking was to grab some lunch. Wifey noticed a well maintained restaurant when we were hotel-hunting, so we set our course there.

The venue’s name is Restoran Sempelang, and they have quite a good serving, that we had dinner there too. For lunch, Wifey sampled their Kerabu varieties (RM 6, plus a drumstick and some gravy), and I tried the Nasi Goreng Lalap (RM 6). 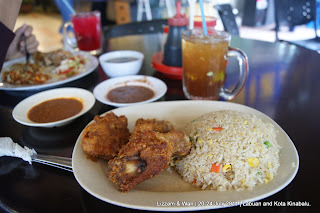 We then return back to the hotel to freshen up. Good thing too, since it rained cats and dogs afterwards.
After Isyak (it’s about an hour earlier in Sabah compared to Peninsular), we went for dinner at Restoran Sempelang (yes, again), this time because wifey wants to have Soto Ayam (RM 5.50). Soto, in Sabah and Labuan, is actually Bihun Sup back in the Peninsular. The difference is, the pickled chilli that accompanies it (it’s actually served as condiments). I had Nasi Padprik Campur (RM 5.50), which is pretty much the standard version. 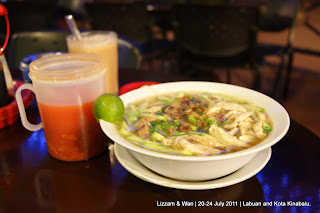 On the way back from the restaurant, we stopped for a while at a Pasar Malam (night market) just behind our hotel. Many are selling brooches and various accessories, while in another side, there are ‘massage parlours’ offering foot, and back massage. There’s also ‘bekam’, where they suck off ‘dirty’ blood from aching areas.

I tried the foot massage, which costs me RM 20, and its painful as heck. Mind you, I’m a frequent customer of foot reflexology, but this one ranks quite high on the pain scale (another one in my list would be the Reflexology centre in Giant Shah Alam). He the offered me for ‘bekam’ plus back massage. It would cost me another RM 30, but I have to decline. Having bruises from the suction cups might be a turn off for Wifey, so that’s too high a price to pay :-P. 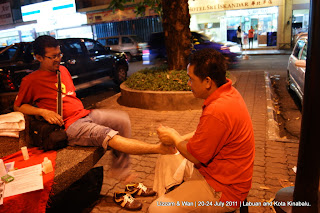 It’s almost midnight by the time I’m done (t
he masseurs are open until about 2am), and we headed back to our room. We retired soon after, and plans for next morning.