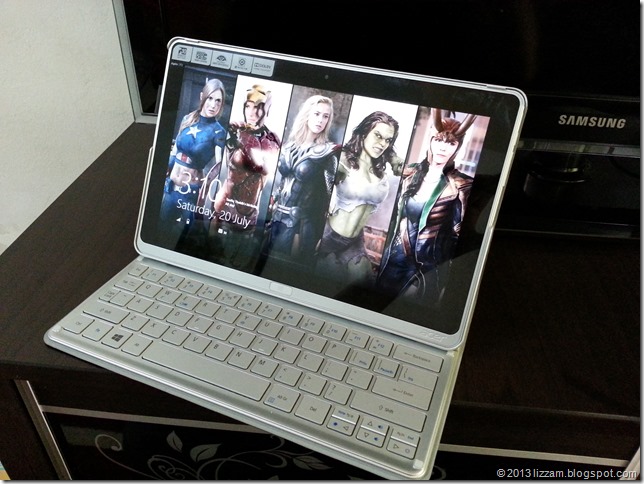 I was on the market for an RM 2,000 laptop a couple of weeks ago. The thing is, most available models are normal laptops, but comes with Windows 8. I really believe that Windows 8 is best used with a tablet or a convertible. it’s even worse so if used without a touchscreen, which may explain the lacklustre performance of its sales.

Going thru the price lists of available options, the offering for a sub RM 2,000 Windows 8 machines are either underpowered (using Atom or even worse, Tegra), or in the wrong shape (Win8 does not feel right with traditional desktop or laptop form factor).

That is, until I visit Acer’s booth.

Acer had just released a bunch of convertibles some time back, with the Star Trek inspired R7 leading the way. While the flagship is too expensive (for my budget) and too big (for my taste), there’s a bunch of tablets, or as Acer would like to market them as, ULPCs (Ultra Low Powered Computers). They are the P3 series.

My previous laptop was an Acer ULPC which has served me well for 3 years, and now serving my dad. it was small and light enough for travel, yet is powerful enough for me to run Photoshop and Flash, apart from editing movies using Premiere or Movie Maker. It’s slower than the current Core series laptops, sure, but with an extra 2GB RAM added to the existing 2GB, this baby never quits anything that I throw at it, except games. My old desktop bought and upgraded circa 2004 can play Half Life 2 and Doom with appropriate settings (mostly low), but the ULPC struggles with Portals with all low settings.

I expect similar performance from the P3. The price when I bought it, RM 1,799 for the Pentium processor, and RM 1,999 for the Core i3 version (I found the Core i5 version with 4GB RAM retailing at 2399 at Harvey Norman a couple of weeks after). All 3 comes with 60GB SSD, 2GB of RAM (except for the i5 version) 5MP rear camera, 720p front camera, and 64bit Windows 8. I chose the lowest model, which suits my usage just fine, and used the savings for accessories instead.
While Acer is marketing the P3 as a ULPC, and the W series as a tablet, both share similar look and feel, and the difference in the guts are negligible. Comparing both side by side, especially now since the W series has ditched the desktop keyboard dock to the faux leather keyboard cover (more on this below) also packaged with the P3, it’s really mind boggling why Acer did that. They are so similar, that aside from the labels, its hard for me to find the difference between these two. 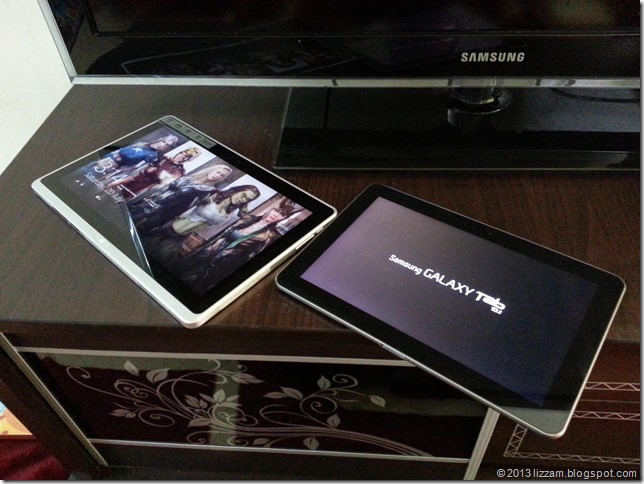 The P3 , on itself, is a tablet PC, with a 11.6 inch IPS screen and a Home button adorning its face. on its sides, are micro HDMI ports (which they bundle with a micro HDMI to VGA converter, more on this below), 3.5in audio jack, a USB 3.0 port, a power inlet port, a power button, and volume buttons. At the bottom are the speakers. There’s no SIM card or SD Card slots, so you’re stuck with the 60GB SSD, with only 29GB available out of the box.

By itself, it’s quite a light tablet. Not Samsung Tab or iPad 2 light, but more like iPad 1 light. Pair it with an 11.6 screen, it’s quite awesome, but the widescreen is not quite comfortable to hold with a single hand for long. holding it in portrait mode improves ergonomics, but suffers in usability. There’s a reason why widescreen tablets are rarely used and marketed as a portrait device.

The screen is bright, and colours are crisp, and displays a 1366×768 resolution. While the resolution is on the low side, it works for screens this size. Especially with only touch input, one can never make the traditional icons big enough for a 1080p resolution. While I have yet to hook this to a HDMI screen, I’m sure it would have no issue outing a 1080p second display. No lag from using the touch input, and the screen registers up to 10 touch points at a time.

The P3 uses a unibody design, with a single, plastic strip on the top, presumably for the antennas, which also houses the 5MP back camera. The aluminium is similar to what one would find on an iPad or a Macbook, and are hard enough not to crease when some force are applied. But beware, apply a little too much force to an aluminium unibody (regardless of make), may result in a semi-permanent bend that’s going to be bad for the device, as experienced by some iPhone 5 owners.

The tablet comes with 2GB of RAM and 60GB of storage. while 60GB may seem okay, but bear in mind that out of the box, Windows has taken up 22GB of storage. with only 29GB to go, and the trend of huge install base for softwares, this can be a big problem. I had to push all of my images and local files to the cloud (I have Drive, Dropbox, Box and Skydrive) to free up space, and only download those i plan to use. the 2GB RAM may also be an issue, but Windows does help by utilising the SDD to assist the RAM. this utimately helps, but I’m not entirely sure if it will help once I got to layer intensive Photoshopping later. 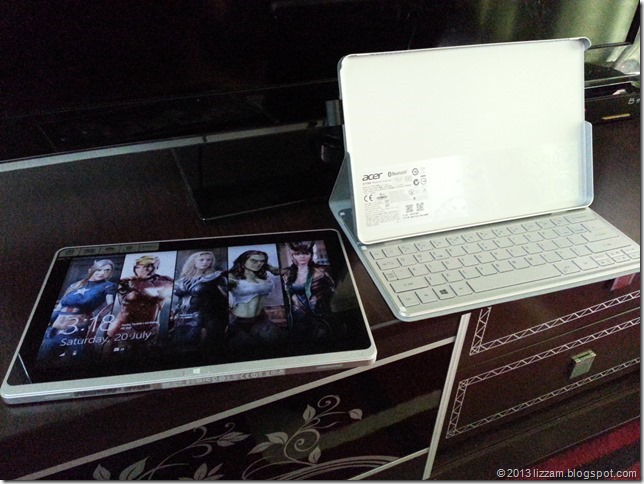 The keyboard cover comes with the package, and adds a nice touch to the tablet, although adding a bit of thickness and weight. It covers the back of the tablet really tightly (you’ll need to really pry it open to take it off) with a plastic covered with faux leather case, with areas to access the side buttons and ports. there are creases in the cover that allows several configuration for the tablet (tablet mode, laptop mode), and it can be closed like a book. 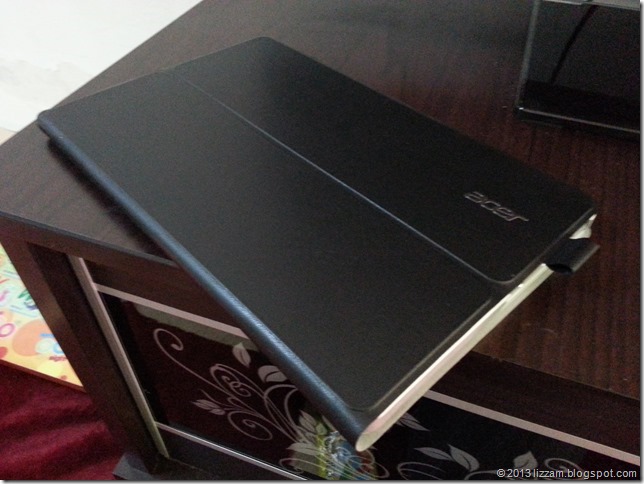 The star of the cover is the attached bluetooth keyboard. While being thin, the keys are nicely spaced and have decent travel, so you don’t really feel like typing on a cover. Feels almost like any other chiclet type keyboards on any laptops. The keyboard is charged using a micro USB port, and Acer claimed that it can last for months per full charge. I’ve yet to test that, but up until now, I’ve only charged it once (during unboxing) and it still works. There’s an additional power key with 2 LED indicators, which are hidden when the tablet are propped up in tablet or laptop mode.

Not much complains on the layouts, except for the Function keys (F1 to F12), and the Home and End keys. Understandably, they are merged with the number keys, and you’ll need to press the Fn keys to use them. Working in apps or softwares that relies on the Function keys much, and you’ll be hard pressed to find an external keyboard. The keyboard seems to be made of plastic, so there might be chances of it bending, making it hard to prop on the lap. the fixed angle of the tablet does not help either. I’m typing this on my bed so I have to prop a pillow between the tablet and my thighs to have a comfortable writing position.

The Keyboard cover does not have any pointing capability aside from the arrow keys. You’ll need a mouse or a track pad, but having only 1 USB port, it is advisable to use those that connects directly via Bluetooth, not using any dongle. The cover and the tablet, are paired out of the box, so don’t worry about that. The tablet goes to sleep mode once you close the cover, so there might be some magnets used, similar to iPad’s Smart Cover or Surface’s Touch or Type cover.

Being a part time lecturer, one of the issues of finding a new tablets or laptops are the need to hook them to a projector. While many new ones have HDMI ports built in, this might not be the case in lecture halls, or offices. Acer conveniently bundles it up with a Micro HDMI to VGA converter, although left out the full HDMI cable. That’s both good and bad, since finding a full sized HDMI converter are easier than a VGA converter, although Acer might as well add both into the package. 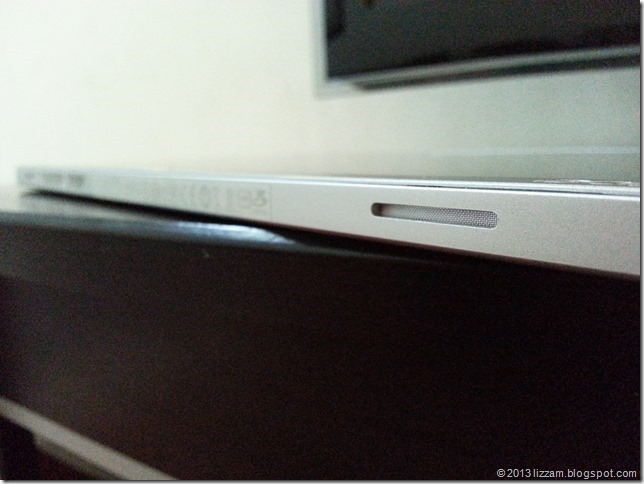 As with other laptops, I don’t find the sound department to be an important feature, since it would be too small to be of any use other than the occasional impromptu listening to music. I would hook it up with a speaker or a head/earphones anyway. But the sound does come quite loud, but lacking the bass, understandably. Propping it up on the keyboard does not block the speakers, however, since the case cleverly add a ridge that acts as a lock and raises the tablet just enough that the sound bounces off the keyboard.