Oh my god…I’ve never felt this excitement watching a reality show, even when watching one by one of the Survivors (said to be the first reality tv show) being dropped, how the Fear Factor contestants fail in their quests, and when the AF contestants shed (his/hers and some of our) tears dragging that Samsonite. And I have never before rooted for a particular contestant in any other TV game shows.

Until I watched Explorace.

To tell you the truth, I wasn’t into it at first. It was when I watch the Reezman and Azhari duo that I was hooked. I mean, they’re crazy, playful, yet so into their tasks that they excelled in every challenge. They were so relaxed, and make every daunting task looks fun. And so, I rooted for them.

I dare say that the Explorace is by far the reality TV shows in the sense of marketing. Heck, if I were a Leader (PM, President, King) of any country, I’d welcome Explorace anytime, and even contribute! It’s far cheaper than spending millions on building tourist spots so they would “feel at home“. When I travel, I want to see and experience new things. Want to feel at home? I’d just book a flight home, now that’s the real deal. Or was they are really talking about expats or those on business? A bit confused, these politicians, it seems.

Back to Explorace. I’d say that the quick-cut editing was also a source of excitement. It was like watching a MTV-style movie. For the next season, I do wish that Media Prima (TV3) would consider to use multi-panel editing, like in 24, or the Semisonic’s Closing Time music video.

In the end, there was these 3 teams, Masita and Misbah, Weng Aun and Chee Yee, and my favourite, Reezman and Azhari. Masita and Misbah were quite good, but they get stressed out all too often, and they may lack some skills in completing some tasks faster. Chee Yee and Weng Aun, was the least energetic of all, and most boring to watch of all three. I’d say this team is the most ‘normal’ of the 3.

Reezman and Azhari, on the other hand, was a little like me and some of my friends, when I’m with them. Immature, playful, jovial, and almost never serious. Not to mention they’re the same age as me! Makes me wonder, how far can I go on Explorace?

So in the end, on the final round in Kedah, the 3 teams fought their way to the finish line. Each team was astounding. Even Weng Aun and Chee Yee showed their brains when they took the shortcut to Muzium Padi (they stopped to asked, of course), and took the lead! Masita and Misbah, despite having a shipwreck (or a sampan-wreck), managed to show their prowess.

In the end, the results are as follows. I could only watch in joy, anticipation, jealousy, and excitement as Reezman and Azhari jumped in joy to the winner’s podium to receive RM100,000 and 2 Golden Holidays tickets to any MAS routes around the globe. 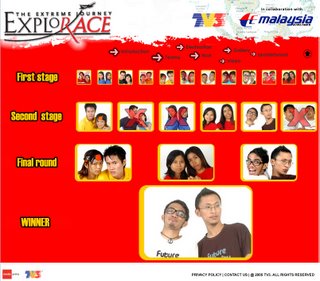 p/s: speaking of jealousy, a friend of mine is going to London on a business trip while I’m stuck in office. How jealous am I! She did ask me to join her, but how am I going to fork out RM5000 for the trip!