I have long been intrigued. Why do our movie productions, do not seem as real as it could be, but foreign productions did a great job at theirs.

I have previously listed the usage of language as the main problem, as the scripts do not feel natural enough. It differs too much from what we use in our daily lives. I don’t want to start nitpicking on the other factors I believe had contributed to the production’s low quality, but I may say something about it somewhere along the line.

I had made a review on 9 Naga, in fact a very good one. I was very, very satisfied. but on a Net research I did, I’ve found some grave reviews on some inappropriate scenes. And when I think of it, it’s logical. Someone from the streets, working as an assassin, shouldn’t have such control of vocabulary and poetic nuances. But we do have poets that comes from the streets, do we? Hope none of those seniman at Central Market are not assassins…

so I came to another conclusion (which I do every so often). Only we ourself knows how real a film depicts us. We may seem Hollywood movies as such, but listening to documentaries’ or news’ interview with a common man shows how different does the way they talk. Pronounciations in films are important, as they had to convey the message to a broad variety of receivers (audience). Maybe that had made the script, and the acting itself a little larger than life.

Thus, a movie, when seen by someone (or something) who’s never been to the place in it, will at a degree, believe what is shown. Many would believe the scene where there were water canals and water villages near KLCC in Entrapment. Many would believe, all undercover Malaysian police must wear jeans and leather jackets, and talk in such a way. Many would believe, that girls chasing after me if there’s a movie about it.

I love Mat Som’s graphic novel (GN) by Lat. I forgot how the movie was like, but the GN, to me, was what we look like at the time. and I believe many would concur. No wonder Yasmin Ahmad’s movie was so close to us. I could imagine myself speaking those words muttered by Orked. 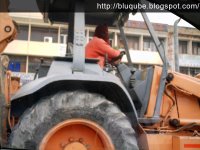 And so, in order to enjoy myself in this May’s movie season, I’m going to work on company’s expense on company’s vehicle.