It was a tiring and eventful day! It started as a normal Saturday, with me (unwillingly) waking up at 6am for my morning prayers, sleep again, wake up again (unwillingly) at 7.15 and off to work at 7.45. Normal.

Right after work, me and a colleague of mine went to KL. What’s the occasion? Well, taking into account my reluctance to drive into KL (yes Nina, I still am) that question deserves an answer:

And so, armed with a not-so-sure-about-the-road-but-we’ll-try-anyway colleague and a map printed from the invitation card, we set off to Pandan Indah to fetch a friend of mine. A couple of unnecessary U-turns later we reached the designated rendezvous point, only to make my blood go upstairs.

No, she (my friend) was not another LMC, nor was she late. It was a Nepalese on a bicycle who scarred My. He was lucky that after almost a year working around Nepalese, I come to realize that asking for damage repair payment (what’s English for ganti rugi?) from a Nepalese is both mean and useless. 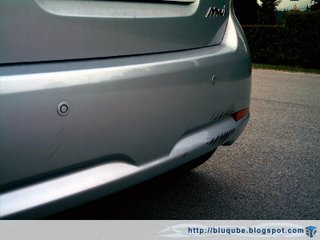 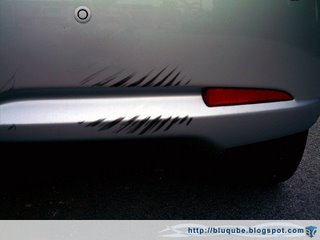 At a glance it looks like modern art, right? If only it’s on both sides

Back to yesterday’s events, we then set off to somewhere in KL that I don’t recognise and fetch my colleague’s girlfriend. We then separated into 2 cars and he led me to the Pye‘s house according to the map. And 4 more U turns if you’re counting it. My colleague and his girlfriend then went off somewhere else for something they had to do, and did not join us.

To our horror, we reached to the reception tent where the people was packing up! Tables were folded and everything else had been packed up. Since the people there had seen us, it’s inappopriate that we just leave like that. So me and my friend approached the men folding the table

And several phone calls later, we came to know that it wasn’t held at Pye‘s house, but a hall instead (Thanks Herman, you saved us). So back to the map we went, since A) Herman didn’t know the exact location of the hall but for some landmarks, as his map is not with him at the moment, and B) the map’s for Pye‘s house, not the hall. That’s another map.

So off we went in search of a hall with a wedding. Another U-turn and voila! There it was. We were greeted by Pye‘s father (I presume) and the phobic me asked him, “Ni betul,kan kenduri kahwin Pyerudz (This is Pyerudz wedding, right)” while hoping Pyerudz is his real name or simlarly pronounced.

The thing is, when I were looking for the groom, I saw somebody else clad in baju pengantin (wedding dress). At that time, Nina called and confirmed me that that was the right place. Only after 10 ackward seconds later did I see Pye. It was actually a wedding reception for two couples. What a relief. 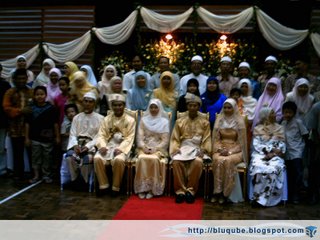 The whole family from all four sides 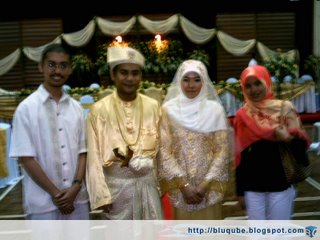 No professional photographer knows how to use my simple and cheap point-wait 10sec-and-shoot digicam, hence the blurred photo. Pye, can I have a copy of the better one? (:p).

After a series of apologies for being late and explanations done, photos taken, I thought it was a pretty good time for a good dose of movie. A good movie does wonder to my stress, and boy was I stressed, with all the U-turns and the incident. Not to mention exhausted. So off we went to KLCC.

Just when we’re getting into my car, it rains. I can even see the rain coming towards me, and the kids were racing away from it. I thought only in flatlands and somewhere near the sea would we experience something like that (it was a norm back in Labuan). I guess I only assumed that knowledge, gotten confused, and now I assume new knowledge.

2 U-turns later we parked at the carpark near As-Syakirin Mosque. En route to KLCC, we came across this nice view. So if anybody ask me how do I know s/he’s a Mawi fan, I can answer either it’s the haircut (me excluded) or it’s the plate number. 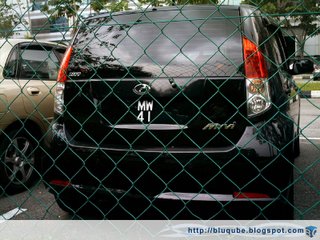 Just as we went into KL
CC, it started to rain cats, dogs, and their owners outside. Feeling comfy inside, we went for a long lunch at Burger King and watched Pirates of the Carribean. Want to know what I think about it, wait for my next post, yah? I think this post is long enough, and the journey didn’t end there and then.

Exhausted as I was, 3 hours of movie was too long and tiresome, even if it’s as fun as the POTC. By the time we got out, it was past 10pm, and I still have my friend to send back, and both of us don’t know the way. Expect more U-turns.

You see, I’ve never been to Pandan Indah before, at least not by driving on my own. And using the same road I used to go to Pye‘s wedding is not an option, because of the many detours we had beforehand. I simply can’t remember the road we used.

So using my friend’s unsure mindmap to her home, a on-the-phone map (a friend of hers), roadsigns and intuitions, we set off, with her constant apology and my constant teasing her filling the atmosphere. Indeed, after 7 u-turns, 9 calls to the guide, 14 occurence of “I think I recognise this road” and 23 “I think we should’ve turn the other way at the junction” sentences later, we managed to reach her house.

My journey home was luckily uneventful as only then do I know that there’s only 7 junctions, 3 tolls and one long straight stretch of highway between our house. Phew!

This is a long and tiring post to write, and also to read, to show you what an eventful, tiring, and exciting day it was last Saturday.

8 responses to “Pye-rates of the Scarred-Myvi-ean : The Dead Road's U-Turn.”