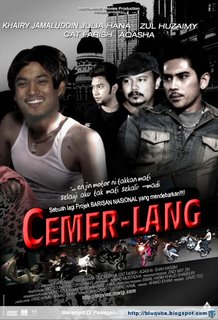 First of all I would like to apologize to Vivian Ng for this poster. Normally I would just edit any poster, but since I got it from her blog, and since she’s proud of her artwork (Who wouldn’t? How many of our artwork actually shown in every cinema in Malaysia, including some in neighbouring countries?). It’s not about your work Vivian, don’t worry.

Utusan Malaysia on 26th Aug reported that Putera UMNO, under the lead of the now famous Khairy Jamaluddin, is planning to create a “rempit” club. Last week our PM suggested that “Mat Rempit” should be rebranded to “Mat Cemerlang”, so they would proceed to be more positive, instead of being a nuisance.

I see the logic of this thinking, but I believe by just simply rebranding do not solve this matter. I believe this may have come from how we view skaters. They were a nuisance, and more often than not, vandal. But when the world recognizes them as X-treme Sport Athletes, this have proven to make the skaters to view themselves more positively, thus moving forward as athletes, not as brats.

The question in mind is, how will Mat Rempit be transformed into a legal one? Building a race track? That would be the same as asking them to ride in Batu 3 or Sepang, which is what the Government had been saying for so long. However, the entry price, insurance, safety precautions, all are expensive and too much of a burden to a Mat Rempit. They’re not rich, mind you. This is not Fast and Furious, where the driver could relax after crashing a 180K souped up Toyota Supra (is there such scene?I’ll have to re-watch the trilogy).

How about organizing a race on the road? For example, the Gelang Patah “race track”. Or a 3 am Jalan Ampang Sprint, or a Genting Downhill Drift. Oh, don’t forget the must have Merdeka Rempit, no, Cemerlang races, with all the glory of Malaysian and Indian flags on the bikes. Yes. Every year there will be at least one bike riding that night waving an Indian Flag. After all, both dates fall on August.

Would Wheelies (this is how you spell it, Tabloids), whee-kangs, superman, be as legal as grinds and flips in skating? Would racing in an organized race be as thrilling to the racers as weaving the traffic? Would the organizers throw in some catch-me-if-you-can race between the racers and the Police or JPJ for extra fun?

Sounds far-fetched, this idea is. Illegal race cannot be compared to extreme games. Ever since human learnt the concept of being first we have been racing. Even in our life, we’re a slave in a rat-race. I’ll elaborate that on another post.

So unless the govenrment can allow street racing every weekends, they will still race illegally. Heck, even if the govenment allow it, they may try to find another illegal thing to do. Legal things are not as cool as the illegal ones, you see.

Another way is, to build another MyTeam, for racers. This way, we could see how many of our youth have the right stuff to be a racer. I don’t really see how they would be organizing this, but now the racers have a better thing to aim for, instead of a little cash, a pat on the back, and maybe one or two girls to waste their sperms on.

Maybe that way Malaysians can improve their luck in the MotoGP!