Yes, I am mad like crazy. Just within several hours I’ve had 3 near misses and 2 careless mistakes, and only 1 of those are “innocent”.

First, was after I exited the toll plaza in Bukit Raja. Suddenly there’s a loud horn blowing to my right, and I saw this black Aveo so close to hitting my car. Seriously, I can’t see her from any of my mirrors, and I cant even see her when I glanced to my right. It was a 100% blind spot. (refer to the left pane in Exhibit A)

You see, during my first month of driving, I had several near-misses due to this blind spot. So I made a habit of glancing back everytime I’m changing lanes, or turning into a junction, or anything that needs me to use the side adn rear view mirrors. 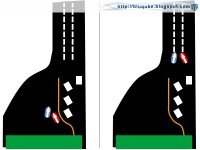 Then, later in the night, I decided to take my sister to the mart. On our way, upon approaching a crossroad, suddenly out of no where, a bicycle dashed across the road, nearly missing being a statistic (refer to Exhibit B). Had I not brake in time, most probably I would be in the blame, since I’m driving the bigger vehicle. Yet thay did not think the dangerous ways these boys are riding their bicycles, crisscrossing the road, and thinking, we can see them in the dark. 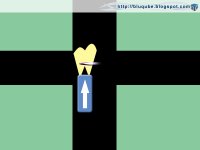 Then I had to go out again. Shaken by the incidents, I chose not to drive, but cycled to my destination. On my way back, there was this Genius, who parked against the road flow, and brilliantly switched on his headlights to full. This caused motorist to be blinded by the light. I was approaching the junction behind the car, when suddenly there a long, loud horn behind me. It seems that a car nearly took me out, since the driver was blinded by the headlight (Refer to Exhibit C). I stopped at the Genius’ car, knocked on his window, and asked him (with the most polite way I could muster while gritting my teeth) to at least switch on his parking lights. I don’t know if the Genius knows what are the parking lights for. 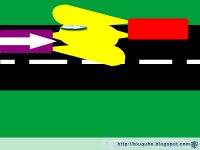 On a lighter note, I’m worried about my father. He’s starting to forget simple, but important things. Earlier in the afternoon, My father parked at the Shah Alam Mosque, and he rode in my car to KL. When we returned to fetch his car, it seems that he forgot to roll up his window, and it was raining cats and dogs! Better yet, the window was rolled all the way down. It’s still damp on press time.

Then, maybe since he’s in a hurry, when he reaches our house, he left the car keys in the key hole! It was lucky nobody took it onto them to do anything bad. I wonder if he was having a big bowel movement that he had to hurry into the house. Exhibit D is a view, when I was trying to park my car, and saw the key dangling there. Is there any cure or prevention for this absent-minded-ism? I might need it too…since I’ve left the car unlocked and the keys at the motocycle one time too many. 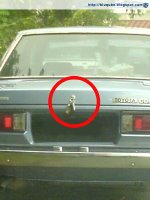