One thing I missed about Labuan (and Borneo as a whole), is the fact that the morning starts earlier than in the Peninsular. Combine this with our early retirement last night, we felt rested in the morning.

After breakfast, we followed Zamhar‘s cousin in sending Zamhar‘s first son (or Laura‘s Mini-me) to pre-school. She then sends us to Universiti Malaysia Sabah – Kampus Antarabangsa Labuan, the place where wifey and me met about 9 years ago. Talk about romantic 🙂 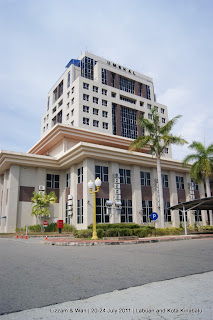 I went trigger happy (I have an extra 8GB sd card to use) and shot anything new or brings back nostalgia. Some of the staff and lecturers still remember us, but due to the holiday/practical period for the university, not many were available. We did choose this date so there are no peak period for travels and hotels, but we didn’t anticipate on the lecturer’s availability, though.

One of wifey’s ex-classmate, Shamsul who’s now a lecturer in UMS became our host for the day. For nostalgic reasons, we had lunch by the beach, which was one of the favourite place during study. 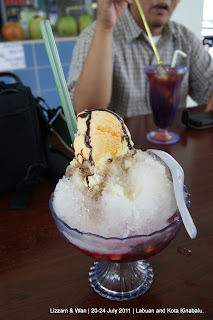 My wifey and me both had ABC special (or as Sabahan would say it; spisil) – RM 3 each , but she opt for Nasi Goreng Seafood while I had nasi goreng Daging Masak Merah. Our friend had Mee Goreng Mamak and 2 glasses of Nescafe ‘o’ suam. All this ammounted to RM 22. Thanks Shamsul, for the treat…

But having it now makes me wonder, was it better then or we just have better taste now? The ABC was bland, and so were the food. Maybe some things should stay as wonderful as it was in the memories.
Shamsul did suggest to us afterwards to a new outlet owned by a Northen guy (Kedah, Penang or Perlis), which serves better food, but we were full, nevertheless.

UMS-KAL has changed a lot over the years. Many of them are improvements, and some are new additions over all. But at a glance, everything looks very similar to how it was, and dare I say it, nostalgic.

Shamsul then sent us to Zamhar‘s house. Zamhar‘s brother, Zoefri, lend us his car to spin around Labuan.

We decided to start our exploration by checking out what’s new in town. But not without something for our family back home.We bought some Kain Batiks with assorted colors and material from Bazar Labuan. Most are priced from RM 5 onwards. Although I’d suggest choosing at least the RM 10 ones for souvenirs. The damage, RM 70 for 6 Batiks (I think? I lost count. The Missus did all the shopping, by the way). 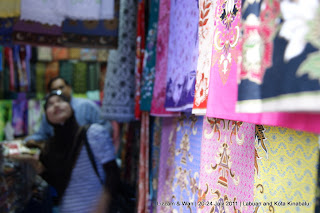 The International Ferry Terminal has now been moved to a new location, and there’s a new mosque right by the sea. We went to the market to find the Salak fruit (I’ll try looking for it’s English name), but alas! It’s not the time of the year. 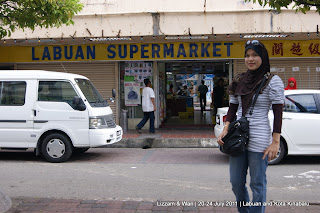 Next, is the most popular stop for UMS students: Labuan Supermarket. While it does not change much all these years, there’s a new bulding behind it, right where they used to sell roasted chicken wings. These were our favourites back in the days, especially the special sweet and spicy sauce. They were nowhere to be found, however. Such a loss. 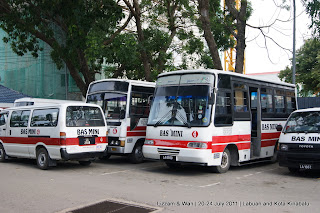 The bus terminal (if you can call it that) is still where it was, even the construction around it causes it to seem claustrophobic. Main target for my lense, the number 4 busses to and fro UMS. They used to cost RM2.80 one way back in our uni days (RM 2.50 for students) but it has been increased to RM 3.40. Add another RM 0.50 and the buses will send you right to your doorstep, provided it’s not too far from the route.
From the bus terminal we went to search for the famed chicken wings, but to no avail. So we decided to ask Wifey’s old classmate, Sabariah to help us find one.

But since she’s only available after 6pm, we decided to go to the Memorial Park. This is park is for the fallen soldiers who died in the World War II, especially during the Japanese occupancy of Labuan.
Most of them were from the Australian regiments and some, the Gurkha’s regiment. Ever wonder why Nepalese are allowed to be guards? They had help our nation in freeing ourselves from the Japanese and the communists, and as the legend goes, they have fought valiantly alongside the British, Australian and our own army. 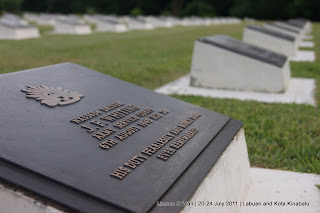 We then fetched Sabariah who was working in the Financial Park or Ujana Kewangan (UK. Yes, Labuan has its very own UK). This is the only mall in Labuan, and is another popular hangouts by UMS students.

We tried going to the Peace Park (Taman Damai. This is where the Japanese surrendered to the British) in Layang-Layangan beach, but the food court over there has started to close (business in Labuan generally end around 7pm), so we headed to Island Tomyam, located near to the airport.

This is one of the more fancy place we used to go as students when we had some extra cash (read: when we got our study loan or allowance from our parents). By Labuan standards, the food is a better than the usual fare at the uni cafeteria. A better choise would be Mawilla, but that’s just my opinion. Choices were scarce during our uni days, you see.

Our host, Zoefri even mentioned that the best chicken wings is not the one we had. That, we’ll just have to see in our next trip, then. 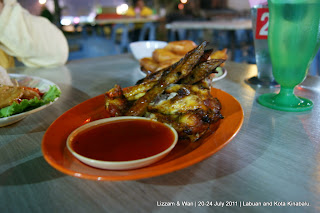 Kichai ping is one of the drinks I missed since I left Labuan. It’s tamarind with lime juice and ice (ping means ice), basically. I can’t find kichai ping back in Peninsular, but Jus Cinta at Santai outlets (RM 3) is very similar.

The night concludes after we send Sabariah back to UMS-KAL, we return to Zamhar and Laura‘s house, and give each other a foot massage.

One response to “Honeymoon! Day 2”