I Am Mean And I Mean It

I was en route to Mid Valley, for a date today. It was a typical Sunday drive, nothing out of the ordinary, nothing exciting.

But when I was passing Seri Setia via the Federal Highway, an incident happened. I was signalling to my left, to go to the left lane, when all of the sudden this old 1980 Honda Civic (I think) came behind me, to overtake from the left. Luckily he managed to brake, or there would be a fender bender. Believe me, I did all the Signal, Mirror and Manouver thing.

I cancelled me going into the left, and stayed on the middle lane, while the Civic sped off and weaved the traffic.

I mean, if you’re familiar with that area, you’d be shocked a driver would be crazy enough to be a speed demon. The traffic was heavy! We’re all going in about 50-60 Km/h but this fella, he’s fast. And he changed between the 3 lanes better than me playing Need For Speed: Underground.

My first thought was, “either he’s racing or he’s being chased”. There’s another fast black Proton Waja, but it didn’t weave as crazily as the Civic, as far as I can see. I was actually saying that the driver was brave enough to

So I drove and thought better than thinking about that car. Not even 100 meters from the place which the Civic almost ram me from behind, the traffic became slower. I turned my head to the left and that’s when I saw it.

A beaten down Civic on the left side of the road, with damaged front bonnet, with it’s front facing the road, instead of facing the front.

It’s clear that the same car that almost had an accident with me had an accident with either another motorist, or the divider. The driver and his passenger (there were 2 in the car) was still in the car, and still moving. I’m quite surprised the car was not badly damaged, considering the way it was driven. I didn’t get to see what happened, nor did I get a chance to help. I was in the middle lane, in heavy traffic. I just called 112 and make sure the operator knows they’re speeding, driving recklessly and dangerously, and met with an accident.

But if I even get a chance to help, I will be helping them out with a mouthful of sermons. In other words, You Deserved It. Yet I guess that wouldn’t stop them from endangering others in the future. This time I don’t regret being satisfied seeing them in an accident, as long as no other innocent motorist were involved.

On another unrelated issue, I think I found the cause why Last Minute Cancellations (LMC) still alive and kicking well in Malaysia, or at least to me. LMCs are those who cancels in the very last possible minutes, and in worse cases, only informs about the cancellations AFTER you call them you’re already at the rendezvous point.

The reason is: They have an Academy for themselves! 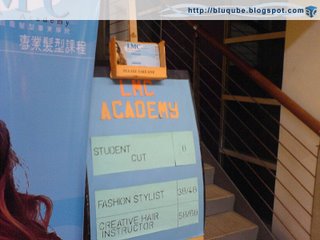 And to close it all off, want to see an example of misleading advertisement? Compare the size of the O.R Fillet Burger (RM3.60), with my hairy hand. At least in the US the called it MINI Fillet Burger (USD 0.99). No wonder Burger King IS the king of burgers. You’ll get the royal treatment in sense of the size of the burgers. 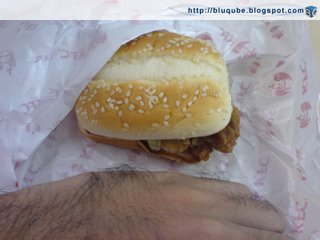 3 responses to “I Am Mean And I Mean It”