When I was reading my usual dosage of blogs, I came upon a post by Chris, about a post by Patrick. This can also be read in IT-Lah’s blog

Although this is already a general knowledge, but being the biggest organization in a country, can’t the Government give us a better product than this?

This is why, sometime back, when the Government said something about a “paperless government”, I was very sceptical, and I still am. Seeing the government websites alone sends me shivers down the spine. Most of it, managed to break at least one web design rules. Here’s some example I’ve seen yesterday: 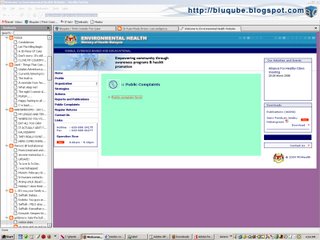 This is the Ministry of Health’s website. Design wise, they didn’t do much wrong, apart from some typo, and the usage of DHTML sub menus. Why is using DHTML submenus are a bad idea, you may ask. I’ll show you an example later on. Although typos are easy to repair, but it shouldn’t be there in the first place, right. I mean, it’s a GOVERNMENT WEBSITE after all, not just a simple blog.

The thing is, there’s a function to complaint to the Ministry, should there be any envirnmental issues. That’s a nifty function, if I may add, but the way they did it, was downright humiliating.

First, the link leads to a download link, for the form in PDF. It’s not like HSBC‘s form where a filled in PDF is produced after filling in some web forms. It’s a normal print-it-out-and-fill-it-with-a-ballpen form. So much for the “Paperless Government”. Have to use my own ink some more. But the saddest thing was, the form itself. Take a look for yourself. 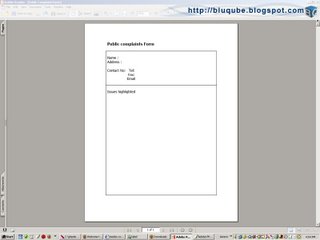 No logo. No proper boxes to fill in our details. No address nor any fax number to send it to. Just a simple paper form that I can do better using a pen, a ruler and an A4 paper. No need a computer one. Even some alignments are off. Don’t they know how to use the TAB key? did they press SPACEBAR to align the texts?

Here’s another example I told you about. On visiting, there’s a splash page asking us which pages should we use, the HTML one or the Flash one. Although the design was way 2000-ish, or even late 90-is, I was suprised that a government OFFICIAL website have a full Flash page. 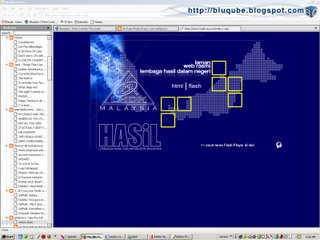 So I checked out the Flash page first. Oh, it was actually a HTML page, with Flash animations made with Swish all over it. Typical mistake people make when building a website, is that they think flashy movements and blinking, striking colors is attractive to readers. 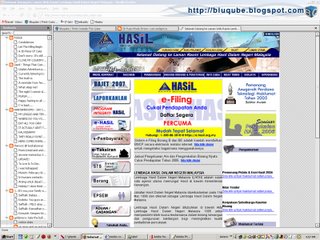 Here is where we can see the ugly side of combining Flash animation and DHTML. You see, using Z-index to make something seem to “hover” over other elements do not work with Flash that well. Flash animations tend to stay at the top-most layer no matter it’s settings. As a result, submenus are buried under the Flash animation, rendering it useless. In the example below, submenus for Pembayaran and Undang-Undang & Peraturan cannot be used at all. 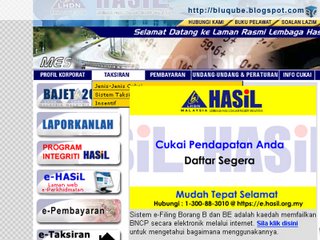 And so I thought, If Flash animations and DHTML clashes in the Flash version of the page, I decided to try the HTML version. And so I tracked back to the splash page, clicked on HTML, and this page appears.

It was the same freakin’ page! First I thought my browser mistaken the link to be the same as the Flash version, so I refreshed, tracked back several times, only to realize, that both link leads to the same page. So those intending to use the submenus for Pembayaran and Undang-Undang & Peraturan, you’re screwed.

8 responses to “Our Efficient Government's Websites”